Joint statement on the death of Deputy Mayor Pam McConnell 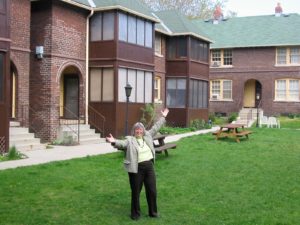 Pam McConnell has been a force for good in thousands of people’s lives. She was admired and respected by multiple communities and organizations. But for the co-op housing sector, she was one of us. We have lost one of our own, and our hearts are broken.

Pam raised her family in the Spruce Court Housing Co-op (pictured). She has served as President of CHFT. And as a Toronto Councillor and as Deputy Mayor, she has always advocated for the well-being of housing co-ops and their members, and for affordable housing for all.

To her husband Jim, and her daughters Heather Ann and Madelyn, we offer the thoughts and prayers of Pam’s co-op housing friends across Canada.

“Pam is a true hero – a co-op activist long before becoming a politician. She is a champion of the people.” Tom Clement, Executive Director, CHFT

“Pam tirelessly advocated to ensure everyone has a decent affordable place to call home. She served as a role model to us all.” Harvey Cooper, Managing Director, CHF Canada Ontario Region

Pam had deep roots in the co-op housing community. Pam lived with her family in Spruce Court Co-op for close to 40 years. She was a delegate to CHFT, a board member and then the president. Pam’s time on the board was a period of growth in co-op housing. New co-ops were opening and the government worked in partnership with the sector. It was also when member services for existing co-ops became a priority for CHFT. Pam was elected three times to the CHFT board. She served for 12 years on the Toronto board of education. She also managed two co-ops.

Pam was elected to Toronto City Council in 1994 when Barbara Hall was elected mayor. At City Hall Pam was a persistent advocate for poverty reduction. She was an effective and strategic politician who patiently worked for the greater good. In total she won fourteen consecutive elections.

As a municipal politician, she brought the women councillors together regardless of their political allegiance. In the famous Jane Doe case, Pam moved the motion to have City Council apologize to Jane Doe. Every woman on council seconded the motion. The motion passed 51 to 1.

Pam was a councillor who served with five mayors. She developed the City’s anti-poverty strategy. She did an amazing job in pulling together the community centre at Sherbourne and Wellesley which includes one of the top three circulation libraries in North American. She played a major role in the Regent Park redevelopment. When the Trump Hotel was being built, Pam took on Trump and won! She made sure that he made a significant financial commitment to building an aquatic centre in Regent Park.

Pam had a variety of roles with the Federation of Canadian Municipalities. She took the lead in promoting women’s participation at the municipal level across Canada. Through a mentoring program that Pam helped create, she mentored a number of young women.

John Tory appointed her a deputy mayor but for so many she really was the people’s mayor.

Co-ops were always close to her heart

Through everything, she kept co-ops close to her heart. When it seemed all levels of government had abandoned the low income members of housing co-ops, Pam stepped in. Some co-ops had already come out of their agreements but there were no subsidies for low income members. Pam worked behind the scenes at City Hall to get the City to provide temporary subsidies. At an absolutely packed rally at City Hall made the announcement. She never forgot about those in need. No amount of red tape could tie her up

Pam always found time for co-ops. She overcame countless obstacles to make sure that Local 75 Co-op on Richmond Street East was built. She attended countless events at CHFT. When CHFT wanted to show people from Atkinson Co-op what a co-op was like, we met with Pam at Spruce Court Co-op. She inspired them. Pam was in the crowd when the Randy Padmore Park was officially opened. Pam loved our scholarship program. She was an honorary CHFT Board member. Pam and her husband Jim received the Century of Co-operation Award in 2010. There is no doubt that Pam packed several centuries of co-operation into her life.

Pam McConnell when she was the President on the CHFT Board

I met Pam McConnell in the late 1970’s at a CHFT meeting. There was a by-election for the CHFT Board of Directors and I am happy to say that I voted for her. She later became the CHFT president and I was hired as member services co-ordinator. I remember to this day how supportive Pam END_OF_DOCUMENT_TOKEN_TO_BE_REPLACED

We all knew Pam as a tremendous fighter working around the clock to improve the lives of not only your constituents but all residents of this city, province and country. The co-operative housing sector in particular owes Pam an enormous debt of gratitude for all her support and dedication to our movement over many decades.

I am sure that I am only repeating what so many people knew about Pam. I appreciated her continuous support for the needs of everybody in Toronto – not grandstanding to get votes from her constituents. Pam’s love of Toronto was always at the forefront and particularly her vision of developing the Toronto waterfront.

When you’re new to a sector and trying to find your way, it is people like Pam McConnell who truly turn shaky stepping-stones into solid rocks of encouragement. Whether it was her supportive words from one former CHFT president to another in order to help me get over backstage nervousness during the annual CHFT Diversity END_OF_DOCUMENT_TOKEN_TO_BE_REPLACED

I first met Pam McConnell at the Christian Resource Centre in Regent Park in the mid-nineties. I believe she was living at the Spruce Court Co-op at the time. Pam would regularly attend community dinners and social events for Regent Park residents. She was a compassionate listener and advocate for the community. Pam’s advocacy work END_OF_DOCUMENT_TOKEN_TO_BE_REPLACED

I first met Pam long, long ago when I was a volunteer organizer at Bain Apartments, where I lived, and she assumed the same role at Spruce Court, where she lived. I recall that we clashed then, in a way that foretold our separate but complementary careers in relation to co-operative housing, hers as a END_OF_DOCUMENT_TOKEN_TO_BE_REPLACED

Pam first blew my mind in 1980. I had just begun work for the Co-op Housing Federation of Toronto and Pam was Chair of the Board. I was new to Toronto and slowly finding my way within a group of passionate, progressive people who were not just dreaming big dreams, but literally building the co-op END_OF_DOCUMENT_TOKEN_TO_BE_REPLACED

I raised my son in Regent Park/Cabbagetown. During Halloween I would take him trick or treating. Pam would always be there handing out candy and talking to the parents and kids. She was always so friendly and had many words of advice for us. As an Oak Street Housing Co-op member Pam was an honorary END_OF_DOCUMENT_TOKEN_TO_BE_REPLACED

Pam was an inspiring advocate for social justice. When she attended my co-op’s anniversary party she expressed interest in finding out more about aging in place. I invited her to tour my adapted home and she agreed. I had the pleasure to work with Pam on issues related to co-op housing and at City Hall. END_OF_DOCUMENT_TOKEN_TO_BE_REPLACED

I first met Pam when she was running for City Councillor the first time. She was quite a fighter and won out the day. The thing that struck me about Pam was that she was determined and had so much integrity. If Pam believed in something she never swayed in her commitment to it. This END_OF_DOCUMENT_TOKEN_TO_BE_REPLACED

One of the last times I saw Jack Layton he was with me as we door knocked at Spruce Court Co-op, Pam’s co-op. I was a candidate, trying to become Pam’s provincial counterpart. The long standing tradition was that she would have taken the candidate around. Why not this time? Why did Jack step in? END_OF_DOCUMENT_TOKEN_TO_BE_REPLACED

Pam was legendary. She battled tenaciously for what she believed in – the rights of Canadians to life of dignity and social justice and the right to live securely in housing they can afford. In particular she was a great friend to co-op housing. Not living in the same city I only met Pam a END_OF_DOCUMENT_TOKEN_TO_BE_REPLACED

Diane Frankling Co-operative Homes has been fortunate to have the support, advocacy, and friendship of Councillor Pam McConnell for the past 20 years. Pam’s long-term commitment to the housing co-op sector in general, and specifically to the co-ops in her own ward, is legendary. Whenever Pam attended one of our co-op events, she always arrived END_OF_DOCUMENT_TOKEN_TO_BE_REPLACED

When I first began working at Don Area Co-operative Homes in 1980, Pam was the most experienced co ordinator in the neighbourhood. I regarded her with awe, having arrived in the job with nothing but determination and CHFT’s manual How to Run a Housing Co-op. When the board consistently took more interest in co-op politics END_OF_DOCUMENT_TOKEN_TO_BE_REPLACED

Pam and I met when I moved into Spruce Court in the mid 70's. She and her husband, Jim McConnell were already residents, and the 3 of us bonded as we worked together to turn these first world-war era low-rise apartments into a co-op. It was in the early years of CHFT, and Pam became END_OF_DOCUMENT_TOKEN_TO_BE_REPLACED

I've known Pam McConnell for over 35 years and she was always leading the call for action. Action that was directed at providing decent and affordable housing for all. In Toronto and across Canada, among her many accomplishments, she was a champion for improving conditions for residents living in social housing and building a stronger END_OF_DOCUMENT_TOKEN_TO_BE_REPLACED