What are the Co-op Housing Land Trusts? 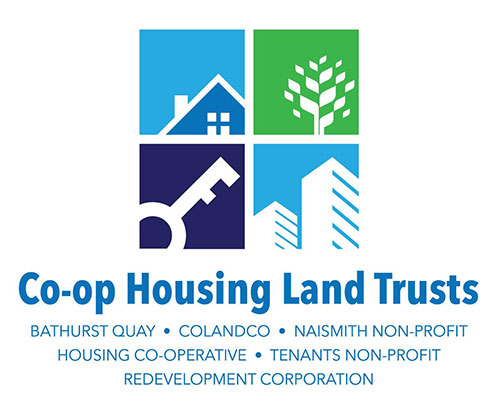 The purpose of CHLT is to preserve, maintain and secure affordable housing. To date we have done this. Having these land trusts means when a co-op’s mortgage is paid off, members will not be able to sell the co-op for a profit. We want future generations to enjoy the benefits of a housing co-operative for years to come.

Below is a brief description of CHLT’s land trusts.

The co-ops in this land trust were originally on land owned by Harbourfront Corporation. At some point Harbourfront decided it did not want to own the land. CHFT successfully intervened in the 1990s. CHFT suggested that if the land was given back to the city, it could potentially be sold in the future.

Colandco was established in the late 1980s and early 1990s when CHFT reached an agreement with the City of Toronto and a developer to establish a co-op. We were able to develop Harbour Channel Co-op and had some funding to explore other development options. The land trust continued to acquire land and create co-ops.

The most notable development was the 770 units of housing at what is now City Park Co-op. We were able to buy the land without risking the entire corporation of CHFT.

Established in the 1990s, the Tenants Non-Profit Redevelopment Foundation (TNRC) was created when private rental tenants believed there was an opportunity to organize to buy their buildings. CHFT took over the administration of this land after the provincial government cancelled the development program in 2000.

Our newest land trust is the Naismith Non-Profit Land Trust. This land trust is currently comprised of one co-op, Naismith Non-Profit Housing Co-op. This is a new model of co-op housing. The co-op has 12 units in the Ten York Street condominium in downtown Toronto. There are five two-bedroom units and five one-bedroom units. We expect to add additional scattered units throughout the city.